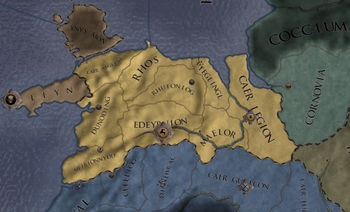 One of the lesser cantrefs of the Kingdom of Gwynedd, Arfon has been the site of many recent battles with the Irish. The capital of this region is currently Caer Segeint and is an actual military fort, originally known as Segontium, that was the main Roman fort in the north of Roman Wales and was designed to hold about a thousand auxiliary infantry. By the 4th century, when it was effectively abandoned by the Romans, Segontium's main role was the defense of the north Wales coast against Irish raiders and pirates; in recent years, the fort has returned to prominence under Chief Cedwyn ap Ysfael as he attempts to re-establish the region as a bulwark against the Irish.