Davino grew up in Venice, and always enjoyed the prospect of ships, and sailing to new sights. So, without Italy being a major player in the New World, he signed on with an English crew as a cabin boy as they were on shore leave. Time went on, and Davino learned quite a bit about cannonry as he ran powder back and forth, during battle scenarios when he wasn't occupied with his other duties.

During one voyage, the captain stopped by an otherwise nondescript island, and Davino heard rumours of possible treasure, which piqued his interest, so he signed on for the away party. The party arrived, and began to investigate an odd wall they had found after several hours of hiking. They spent some more time attempting to solve the puzzle, at which point, the captain tossed the map aside, and muttered under his breath that they only thing they need is to find the key to open the door. Keying in on that, Davino took half the party's powder, packed it into a couple of the party's canteens, and slipped in a few wicks he came across previously, and lit them.

The captain's yelling at Davino was almost as loud as the explosion.

The plan did work, however, and the wall was cracked open. Turns out whatever was inside the alcove was now a pile of ash and debris, but hey, Davino opened the wall, and that's what the captain asked; he never mentioned leaving other things intact.

One good thing that did come out of this misadventure was that the explosion, for some reason, attracted a monkey who seemed rather drawn to the explosively-minded Davino, whom he thought of naming Bewm, after what brought the pair together. Over time, the pair managed to learn to work in concert; Bewm bringing Davino powder, small grenades, bullets, or wicks to light the explosives Davino grew fonder of carrying.

Several more years passed, serving aboard the Providence. Davino continued to bulk up and learn gunnery by beginning to man a cannon. This led to standard rifles and muskets feeling almost under-powered and that Davino isn't using his strength to its full potential, and so he began to look for heavier options. The captain had a beautifully-ornamented cut-down wall gun hanging in his cabin, which he forbade anyone to ever touch. But Davino couldn't resist, and sneaked it out one night for a test-fire. The captain found out it was Davino who "decided that the lily-livered, lard brained, screechy snot rag didn't deserve such a fine piece of artillery". The captain threw Davino into the brig. Shortly thereafter, the Providence was involved in the retaking of the Beowulf, and Davino was released from the brig to help. During the fight, the captain was slain, and quite separately, Davino grabbed the captain's wall gun and put it to good effect against the enemy. After the battle, Davino was allowed to keep the weapon—he'd earned it. 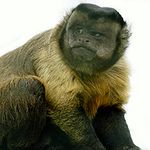 Davino's mostly-deaf Tufted Capuchin monkey companion, with a knack for helping with explosives