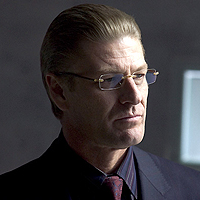 At the time Ned Sainte was COO of Tri-Optimum Corporation, around 5-6 years ago, Sarah (16/17, late high school) glanced at some papers/etc. and accidentally discovered some discrepancies. Ned looked into it and found some actual malfeasance on the part of some of the board members, and dutifully brought it to the attention of his long-time friend, the CEO. He knew "heads would roll," but he didn't expect his would be among them. The attempted reveal resulted in a god-awful, nasty mess, that ended with the CEO's unceremonious firing (replaced by one of the offending board-members), followed by Ned's legal prosecution soon after for the "leak." Ned was completely ruined, socially, financially, and legally—the more salacious accusations turned out to be false, but they left a stain he couldn't wash away in spite of it. Sarah was only barely avoided sharing his fate on account of her minority, though not for lack of hostile efforts. The trial was railroaded through, and Ned was sentenced to ten years at a minimum-security prison. Due to his actions, both real and manufactured, and his incarceration, his wife (Sarah's mother) eventually divorced him and moved away. He has maybe half his sentence remaining, with the possibility he could get out on parole, but Sarah keeps digging, hoping to clear his name.