Former US Army Ranger, with a combat tour in the "Sandbox"; trained as a sniper/DM. Plus a "try anything once" attitude.

He was always the classic "class-clown"—outgoing, sarcastic, joker/practical-joker—but deep down, a straight-up good guy that would always stand up for the weak. As the Lancer in Raphael's Power Trio, he keeps Rafe from getting "too serious" and/or "too predictable"—always encouraging him to get out there and do something, and maybe have a little fun while he's at it. An impulsive adrenaline-junky, always ready to try something new—bungee-jumping, base-jumping, rock-climbing, etc. He likes video games, guns (shoots regularly, though he doesn't see everything as a pop-up target), and cars (street-tuners, primarily, but he watches Formula 1 and GT3/sports-car racing). As a policeman, his impulsiveness, willingness to bend the rules, and intolerance of inept authority-figures and (ironically) corruption makes him the typical "maverick" in his department. He drinks and smokes, but not to excess. He loves Kit madly, even though she drives him nuts.

Michael was born and raised in the suburbs of Knight City, in an otherwise unremarkable family: two parents, and a younger brother and sister. He spent much of his time with his lifelong friend, Raphael D'Angelo, with whom he intended to join the Army after high school. However, in his sophomore year, Rafe's eyes began to mutate, resulting in vision problems that ultimately disqualified him from military service—Rafe insisted Michael go on without him. Michael spent four years in the Army, stationed in Georgia, with a combat tour in Southwest-Asia. Nicknamed "Foxy" from the start, he craved the (occasional) thrill of field operations, but the drudgery and bureaucracy that went with it wore down any desire to re-enlist when his term-of-service ended. Hearing of the rising crime rates back home, he returned to Knight City to become a policeman—chasing down bad-guys might calm his craving, while helping make his old neighborhood safer. He started dating Kit soon after he returned—they were perfect for each other, by all accounts—and they married after a year. He should have been happy. But he soon found the KCPD to be little improvement over the Army. Additionally, he found himself at odds with corrupt fellow officers, eventually resulting in his more-or-less permanent reassignment to [desk job] to get him out of their way.

A year ago, Rafe returned from Japan after his martial-arts master had [disappeared/died]. He was a different person, now with secret "special abilities" and a determination to put them to good use. Mike immediately knew that helping his best friend realize his potential might be the best way yet to feed his addiction for action, and maybe do the community some good at the same time. 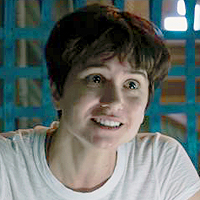 Kit is a bartender. She worked Mike's coming-home party when he returned from the Army; he ended up spending most of the night talking her up at the bar. The two may as well be soulmates—she's just as nuts as he is. They would skydive or bungee-jump together. They dated for a year or so before they married. Rafe was Mike's best-man in absentia (he was in Japan at the time); Kit never met him until his return, but she heard all the stories. She won't admit it, but she's a little jealous of his relationship with Mike, though not to the point of resentment. Her late nights at work often means she doesn't spend as much time with Mike as she'd like, having to leave him alone to fend for himself. At least he usually has Rafe there to keep him out of trouble…